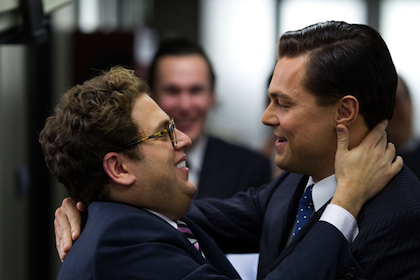 Bells are wringing, white smoke is emanating from the Vatican, and stylists all over Hollywood are licking their chops – THE ACADEMY AWARD NOMINEES ARE IN!

The morning began very sssexily when my secret husband Chris Hemsworth stepped up to podium to help announce whose days just got a lot brighter around here. Suffice it to say, none of the nominees were a surprise – they are all plenty deserving for their work. But there are only so many nominations to go around, and unfortunately, in a year that saw a plethora of outstanding work, other folks just as deserving got left in the dust. C’est la vie…

The first big surprise: while the Golden Globes hinted that American Hustle’s chief competition would be 12 Years a Slave, the Oscars have decreed that it will actually be Gravity! Both films received 10 nominations each, which is, in laymen’s terms, a buttload. Many critics and viewers alike seem to agree that, while American Hustle was entertaining, it is not on par with the likes of 12 Years a Slave or even Saving Mr. Banks, the latter of which only got one measly nomination (for Best Score). Gravity, meanwhile, has been winning raves on all fronts, not just for its amazing and innovative cinematography (which got a nod) but for the (literally) breathtaking performance by Sandra Bullock, who is nominated in the Best Actress category.

And speaking of Best Actresses… who says there aren’t any good roles left in Hollywood for “mature women”? The youngest actress nominated in this category is 39 (Amy Adams). The average age of all five (which also includes Cate Blanchett, Judi Dench, and Meryl Streep) is 55. So, there’s that. Although, as far as I am concerned, this category is missing one very specific 54-year-old… namely, Emma Thompson. As much as we love Meryl, we could definitely afford to give her a little Oscars furlough this year and allow Emma to play with the big girls again. True, Emma did win Best Actress for Howard’s End, but that was 21 years ago! Girlfriend is due! In fact, Amy Adams is the only actress in this crop who hasn’t already won at least once before (despite four previous nominations)… Does that give her an edge? Well, not exactly. This could be the year that Blanchett upgrades her Supporting Actress trophy for a Leading one.

But you know what is REALLY exciting, you guys? LEONARDO DICAPRIO WAS NOMINATED FOR BEST ACTOR!!! I’m sure some of you are thinking, “Well, duh, why the big to-do?” Well, I’ll tell you why… Think back over the last 15 years or so to all the varied and spectacular performances that Leo has turned in. Now, let this statistic sink in: Leo has only been nominated for an Oscar THREE times. And what were those three movies? What’s Eating Gilbert Grape, Blood Diamond, and The Aviator. Yup. Do you get it now? I know one blond-haired, blue-eyed Italian who is turning to whichever supermodel he’s dating now and throwing his head back and shouting “FINALLY!” today…

Of course, he’ll have wrestle that Oscar out of the cold, capable hands of the likes of frontrunners Matthew McConaughey and Chiwetel Ejiofor. But there’s every possibility that those two could split the vote. Don’t count out Bruce Dern either… the Academy loves an aging legend.