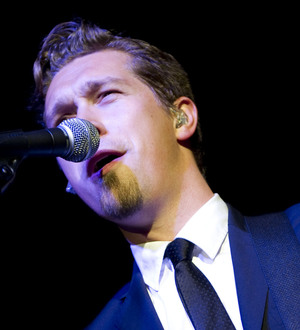 Hanson have sparked a new feud with the Kings Of Leon after taking aim at the Sex On Fire hitmakers for their bad attitude.

The group has often been criticized by their peers for their dour, reluctant rock star image and now fellow family act Hanson have taken a swipe at them for the way they let fans down after scrapping an entire tour following frontman Caleb Followill's decision to walk offstage midway through a recent show in Dallas, Texas.

Caleb Followill has since been put on vocal rest, but Hanson star Isaac Hanson is convinced the problems in the feuding band run deeper and are more serious than the singer's vocal cords.

He tells WENN, "I have a hard time with musicians who act like p**cks because it just makes me mad. I just sit there and I go, 'You know what, dude, no matter whether you're in a band just surviving or you're in a bus playing stadiums, one way or another you're still among the rare breed of people that are actually getting paid to do it.'

"If you're actually making a living doing it, man, pinch yourself every day, because it goes if you don't love it... and people will eventually get p**sed off.

"And I'm gonna call somebody out on it - the Kings of Leon guys are running some risks. They're irritating people; you can't do that too much. Eventually the bad boy image affects fans' willingness to show up. Their fans will get bummed out.

"Everybody has their demons, everyone has their challenges... I'm a bit of a hothead in certain circumstances, but you gotta temper it because your fans are there and they've paid good money to see a show, and you gotta bring it. I don't wash my dirty laundry in public, I do my dirty laundry backstage... I have flipped the bird at a few people that deserved it and told them to go 'f' themselves."

And he urges the Followill brothers and cousin Matthew, who was born in Hanson's home state of Oklahoma, to sort out their problems or run the risk of becoming the next Oasis: "They got that too and it hurt them ultimately, because it made it hard for people to have a lot of fun at their shows - because they were worried that Noel (Gallagher) was gonna get p**sed off (and walk off)... But I don't think that they (Oasis) necessarily didn't finish shows."