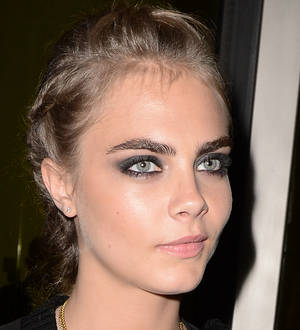 Cara Delevingne was among the front runners for the title role in Tim Burton's big screen interpretation of Alice In Wonderland.

The British supermodel was still at school when she heard the moviemaker was putting together a new adaptation of the Lewis Carroll classic with Johnny Depp, but that didn't stop her sending in an audition tape.

She later found herself in the running for the part of Alice, and was even invited to meet Burton at his London home, but eventually lost out to Australian star Mia Wasikowska.

Delevingne tells W magazine, "My interpretation of Alice was a little crazy. I overplayed it - the way a young girl would overplay all her emotions. I sent my tape off, and then I was at a wedding and this woman came over to me. She said, 'You don't know me, but I know exactly who you are.'â€Š(It was Lili Zanuck, wife of the film's producer Richard Zanuck). She told me that they all loved my tape! And I went to Tim Burton's house and met with him. I didn't get the part, but that experience lit a fire in me."