"The Walking Dead" Keeps Momentum Thanks to Multi-Platform Integration 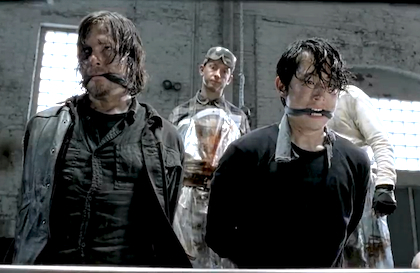 "The Walking Dead" has just jumped into its fifth season, and it’s everything fans could have hoped for!

The AMC show has evolved into a very intricate and beloved television series. They’ve had their ups and downs, for sure, but after four seasons, they are still going strong. In fact, I’d be bold enough to say that they are doing better than when they started the series. Many television shows start to lose some momentum as time goes on for many different reasons, but "The Walking Dead" is not one of them, being able to successfully create a long-series adaptation because of the quality of content found in the different avenues that has shaped the plots and stories of "The Walking Dead".

In case you didn't know, the show is an adaptation from Robert Kirkman’s graphic novel and comic book series of the same name. As we all know, adaptations are hard to tackle, but the producers and directors who took on the project were ready and very talented. As a reader of the novels and a fan of the show, I believe the producers and writers have done wonders with the series. They are able to create Kirkman’s dystopian world and storyline to keep the readers happy as well has adding in original characters and story plots to keep everyone guessing.

Don’t believe all the hype? Maybe you should. Not only is "The Walking Dead" a comic book/graphic novel and a television series, but now there are actions figures, webisodes on amctv.com, and Telltale Games has released a video game series that is currently developing their third season game. Many YouTube gamers have created “Let’s Play” videos for The Walking Dead game.

One thing that keeps this new season fresh and enticing is how they have integrated parts of the comic books and the video game into the television series. If you’ve read the comics and played the video games, you know exactly what I am talking about. I won’t give away any spoilers, but I will say that if you’re dying to know what’s going to happen in Season 5, then you might want to check out the first few issues of the comic books and play the first season of the video games. You’ll be able to parallel some of the characters and plotlines this way.

The writers of the television series have done a wonderful job of integrating parts of each medium of "The Walking Dead" franchise with original content. By doing this, they allow new fans who aren’t familiar with the comics and games to enjoy the series as well as retaining the die-hard fans who have read all the comics and played the games. This is something that many adaptations fail to do.

Much like a real zombie virus, "The Walking Dead" story is an epidemic that has taken over many.

For more "The Walking Dead", check out AMC’s website.

And be sure to catch some of our interviews with the different cast members!

Don’t forget to watch "The Walking Dead" on Sundays at 9pm on AMC!