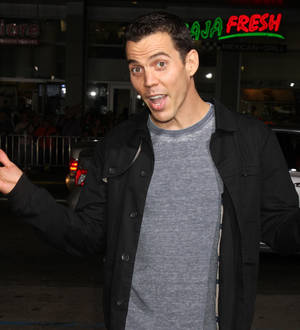 TV prankster Steve-O has criticised stars taking part in the charity ice bucket challenge for failing to help the cause by forgetting to share donation details.

Some of the world's most famous names, including Justin Timberlake, Lady Gaga, Charlie Sheen, Ben Affleck, Taylor Swift and Britney Spears, have doused themselves with freezing water for the ALS Ice Bucket Challenge over the last few days.

The online campaign, which aims to bring in money and raise awareness of Lou Gehrig's disease, also known as motor neurone disease, has become a sensation, but Steve-O claims many of the big names taking part are letting the charity down.

Steve-O recorded his own ice bucket clip poking fun at stars who simply throw water over themselves and pass the challenge on, insisting everyone taking part needs to share the charity's details and tell fans how to donate money.

In a message posted alongside his video clip on Instagram.com, he writes, "Since the ice bucket challenge began, over 15 million dollars has been raised for ALS research. I think that's great, but when you consider all the star power of... Justin Bieber, Lady Gaga, Justin Timberlake, and countless other A-list celebrities who have actively gotten behind this cause by posting videos - the fact that not more than fifteen million dollars has been raised is a tragedy.

"It's tragic because I don't believe one of those celebrities even bothered to share the slightest clue about how or where to donate money for ALS research - I think Charlie Sheen and Bill Gates were the only ones who even hinted that the entire point IS to donate money. All those other celebrities just poured water over their heads and named three random people, without including any 'call to action' which actually benefits victims of ALS at all. Had all those celebrities given this cause any thought, hundreds of millions of dollars might have been raised, and a whole lot more awareness."

Steve-O goes on to urge all newcomers to the challenge to share the charity's details so more money can be raised.

He adds, "Let's start a new trend - by actually letting people know how to donate - visit this page www.alsa.org/donate... I'm nowhere near as rich or famous as many of the folks you've seen pour water on their heads, but I cared enough to get educated and donate one thousand dollars of my hard-earned money to www.alsa.org/donate."